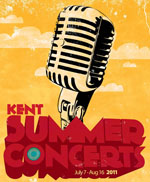 Throughout  July and August, enjoy a variety of the region’s best live performances in some
of Kent’s most beautiful parks –for free! Call 253-856-5050 or visit kentarts.com.


July
26: Reilly and Maloney
The enormously popular duo of Ginny Reilly and David
Maloney are together again, delivering their signature brand of acoustic,
contemporary folk.

Comedy, juggling and crazy stunts from this former star of “The Gentlemen
Jugglers.”Roberto the Magnificent rides towering unicycles, performs amazing
feats and juggles everything from knives and torches to rubber
chickens!

Caspar Babypants puts on a fun, simple, sing-along show for kids age 0-5 and
their parents to enjoy together. Old folk songs and good time rock and roll mix
together to make the show a timeless treat for all ages.


August
3: The Misadventures of Cap’n Arrr
This interactive comedy show for kids of
all ages features “The Funniest Pirate to Never Sail the Seven
Seas!"


July
14: The Halyards
This Northwest-based band is bringing a new voice to the
Americana music scene. Superbly blended harmonies and driving guitars give them
their sound, while intelligent song-writing gives them their
depth.